The Data Arena audio stack is a fairly standard linux audio setup typically found on a Professional Linux Audio DAW (Digital Audio Workstation). Typically linux systems have to select between the (professional) Jack and the (regular desktop) PulseAudio systems. They've been integrated in the Data Arena, such that the stack operates as: PulseAudio -> Jack -> ALSA. This means just about everything works. Regular Desktop Audio speaks to PulseAudio, which passes audio through Jack, and all the Jack tools work as well. ALSA is the underlying (relatively simple) Audio Layer which all Linux Systems run. 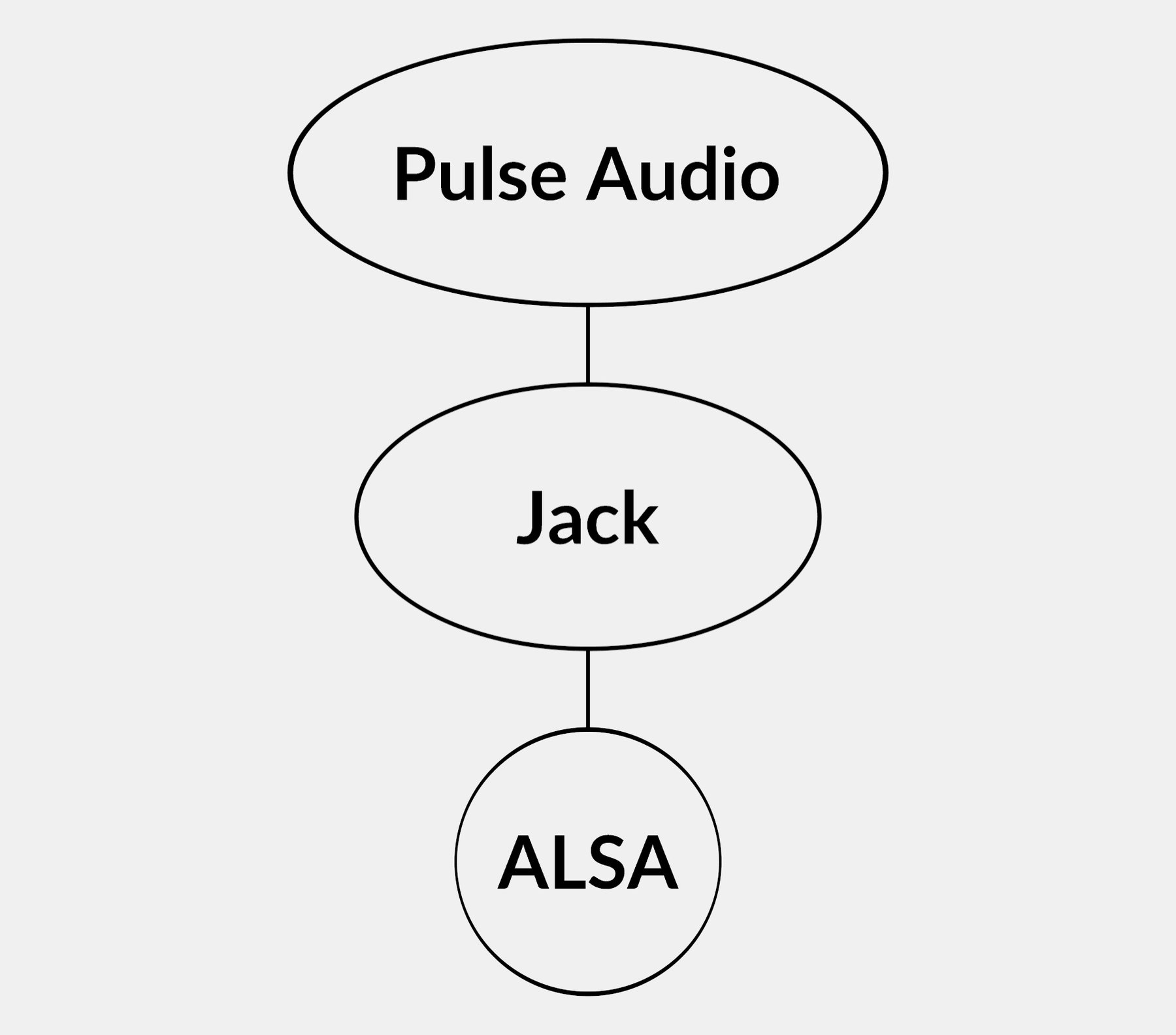 Although the Data Arena has 16 speakers, the audio file format expects 22 channels. Think of it as allowing for future expansion. Channels 17–22 are expected to be blank, though it doesn't matter: they're ignored.

A simple .wav file will work. It can be test played on Solo with the unix command:

Here is a 22-Channel wav audio test file (20MB) which you can download:

Here is the same file in ogg vorbis format, which allows 22-channels, but is a much smaller sized file (0.1MB)

When you play this file in the Data Arena, each speaker reports in turn its speaker-number. Speaker number 1 says "one". Then speaker number two then says "two", and so on up to 14. Speakers 15 and 16, being bass LFE speakers, say "fifteen" and "sixteen", but these sound like a very low "boombooohm", "boomboohm".

Loaded into Audacity the 22-track file looks like this 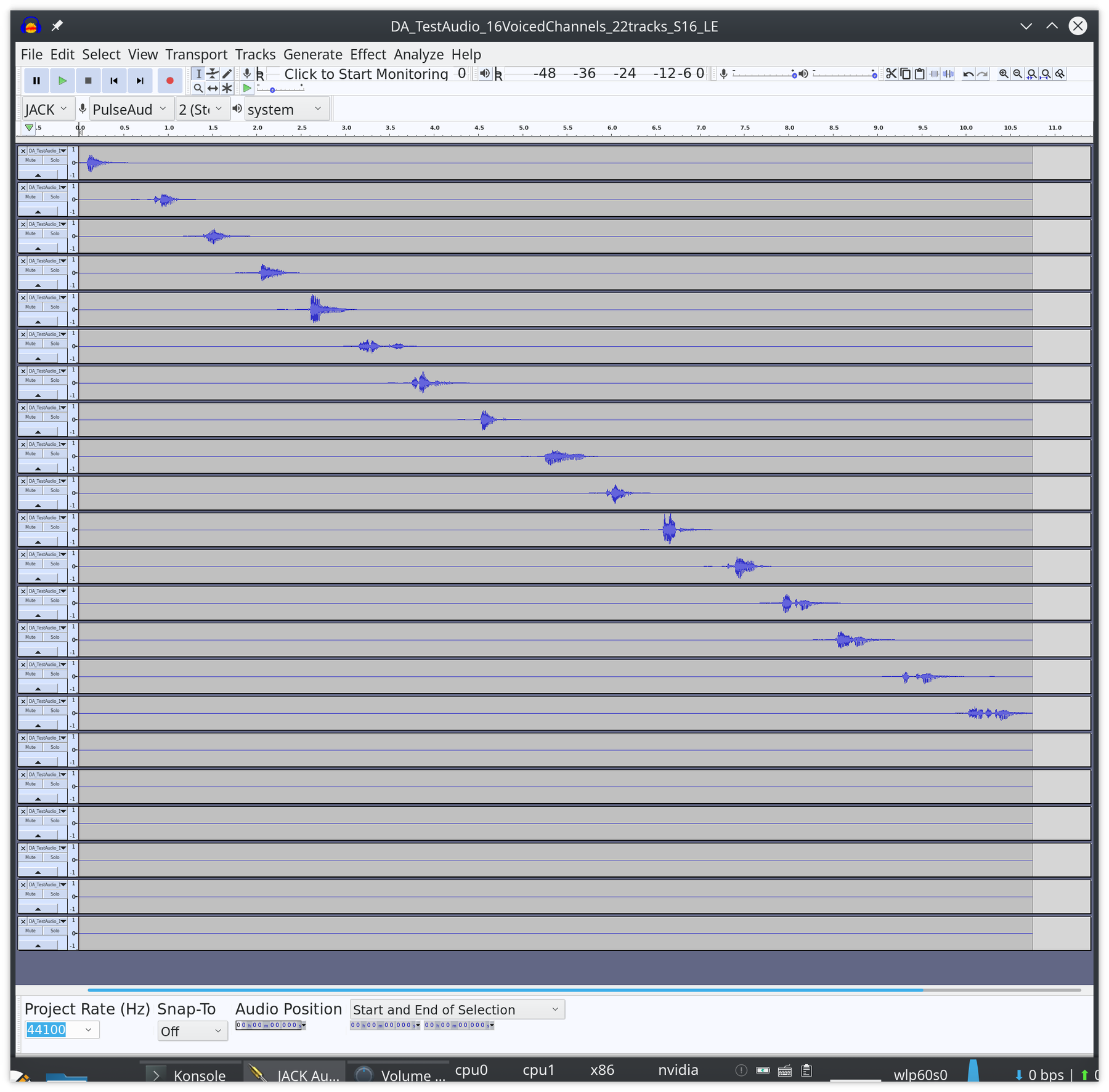 Notice (above) the first line (track one) only has one sound sample on it, right at the beginning. That is because that speaker reports "one!" at the start of the audio playback and then stays silent (flat line) while all the other speakers report their speaker number. Standing in the Data Arena, you hear "one two three four ...." from each speaker, going clockwise around the room. Notice the diagonal arrangement of samples...

If you wish to create spatial audio effects, this can be done in software (such as Audacity, or the equivalent) and rendered out to the 14 channel ring. So long as you deliver the audio tracks to the right channels it will work. For instance, ambient room effects can be created.

22 Channel Audio can be added to any movie file such as mpeg or avi and it will play back as expected. Solo will see the audio tracks inside the mpeg movie and send the audio to the RME Fireface. ffmpeg can be used to add video and audio together. sox is a useful linux tool to manipulate audio.

REAPER supports a vast range of hardware, digital formats and plugins, and can be comprehensively extended, scripted and modified.

Reaper can be used to create spatial visualisation and processing of stereo, surround, or multichannel audio (up to 64 channels).

The Linux version of Reaper 5.979 is installed. To run it open a linux shell (Konsole terminal window) and type:

This is where things will get interesting. We have OpenAL installed on Solo, which means interactive audio, or software which creates interactive 3D Audio can drive the audio in realtime.

Matlab can be used to generate live audio in the Data Arena, through Matlab running on Solo. More on this soon.

Here's some example ffmpeg commands to show how easy it is to manipulate video and audio. In each example, hopefully you can recognise the input filenames as inFile.mpg and inFile.wav and so on, and the output files with names like outFile.mp4.

To COMBINE 2 files into one, say a video file and an audio file, you could do this:

Many many formats are known by ffmpeg, so don't worry if your inFile is an avi, or mpeg, or mp4 etc. To Strip the Audio from a movie file, leaving just an audio file as output, you could do this:

ffmpeg can be installed on OSX via brew. Have a look here. There's a lot of examples of how to use ffmpeg to manipulate video and audio. For example see here.

When working with video and audio files it is really useful to be able to see what is contained in a media file. There are many ways to do this. in the Data Arena we use a program called mediainfo.

Here's an example which shows what's in the "Ogg Vorbis" format audio test file above.